WHY #KAFKA DID NOT GET MARRIED. 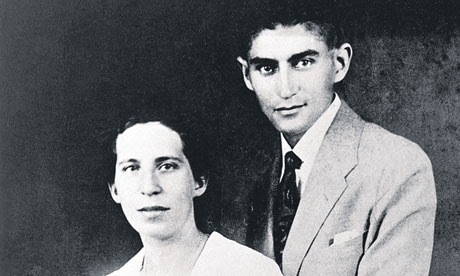 More from Kafka's Letter to His Father:
Of course you could say quite a bit about my attempts to marry, and you did. You were unable to show a great deal of respect for my decisions since I broke off my engagement with F[elice Bauer] twice and twice renewed it again, when I dragged you and mother needlessly to my engagement party in Berlin, etc. All that is true, and how did it come about?

The basic idea behind my attempts to marry was sound: to form a household, to become independent, an idea which is agreeable to you but in reality works like the game children play, in which one holds on to the other and even presses his hand, calling out: "Go then, go already, what’s keeping you?" In our case there is a complicating factor: you truly meant the exhortation “Go already!” At the same time and without being aware of it, you held me fast or rather you held me down because of who you are.

Kafka's father wrongly thought he had acted impulsively in taking up with Dora Dymant.You thought I could decide to marry in one fell swoop, just because of a blouse [Dora was wearing] – I who was so anxious, hesitant, and suspicious. If he had married either woman, it would have been the result of a rational decision.

Neither of the girls disappointed me, although I disappointed both. My judgment concerning them is exactly the same today as it was then when I wanted to marry them. Why, then, did I not marry? There were several roadblocks, as is always the case, but life consists in surmounting those roadblocks.  The main roadblock, however, had nothing to do with the women specifically. Apparently it had to do with my mind, my inability to face marriage, which manifests itself in this form: from the moment I decide to get married, I can’t sleep. My head is glowing hot day and night. I can’t stand to live like that. I am undecided and in despair.  This is not caused by actual worries. Although worries are a constituent part of my melancholy and pedantic mind, they are not the decisive element. Yet, like worms in a corpse, they complete the destructive work. The decisive element is something else: the general pressure caused by anxiety, weakness, and lack of self-respect.

(Source: Letter to my Father, text on www.kafka.org; my translation)