She perceived reality with devastating precision and her quest for an equivalent precision in language was a sort of fixation.

The artist Hugo Rask was another sort of fixation for her.
From feeling respect for him on Sunday, she progressed to reverence on Tuesday and by about Thursday she felt an insistent yearning, which by Friday turned into a deep sense of lacking something.

She had set herself the task of decoding reality and locating language’s most truthful illustration of it. But she miserably failed in this task as far as Hugo Rask was concerned.
She was confused when he peered at her through the smoke rising from his cigarette, which made his expression look both superior and indifferent.
It was hard to gauge him because he was always surrounded by people. She would have preferred him to be a solitary being with a fissure of longing in him that she could fill.

She wondered why she was attracted by him in the first place. Perhaps she had engineered falling in love with him because she had imperceptibly grown bored and needed this anxiety intermingled with hope.

But she accomplished nothing. Life was composed of an endless series of nows in which one lacked the energy to do what one wanted to do, and later, too, would prove to be a now that was also deficient in energy.
And so the affair went nowhere and she suffered.


The suffering would intensify and become more concentrated for a few days, but it was purer and less unclear now.
Posted by Erika Rummel at 03:03 No comments:

A novel full of elementary truths!
And tongue-in-cheek truths:

Eco should have added: And you create a commission to look into the matter. Several years and millions of dollar later, the commission comes up with a report containing 268 non-binding recommendations. Now you can wash your hands of it for good.
Posted by Erika Rummel at 05:59 2 comments: The protagonist of this novel is a popular physician. The secret of his success:
Giving the patient twenty minutes of his time. Mind you, after sixty seconds I’ve seen all I need to know. The remaining nineteen minutes I fill with attention or, I should say, with the illusion of attention.
Compare that with the work of a psychologist probing your phobia. After years of digging and delving, something finally bobs to the surface: a mother lost in the supermarket, a snail in your tennis shoe, a funny uncle. Now, will that give you any more satisfaction that twenty minutes of attention?
Some men get their satisfaction from girl-watching:
A film slid over his eyes. In nature films, you see that sometimes with birds of prey. His lips parted. He was seeing something delicious. His mouth was already anticipating a tasty morsel.
Women, on the other hand, may get their satisfaction from securing a provider.
Women are the soccer stars of creation. At thirty-five they are ready for retirement. They have to make sure they’re home and dry before then. A roof over their head, a husband, children.


Sooner or later we are all ready for permanent retirement. So let’s have a good funeral. If you are an artist, there should be laughter and drinking and bad language at your wake. A real blowout. No weeping and wailing. Fuck, no! A bourgeois funeral is an artist’s worst nightmare.

Hope you haven't missed my quotes from Koch's novel Dinner in an earlier blog.
Posted by Erika Rummel at 11:56 No comments:

KAFKA’S FATHER REPLIES: You have no capacity for life.

In the Letter to His Father, Kafka imagines his father’s reply:

You have in mind to live off me entirely. I admit that we are in a fight, but there are two kinds of fights – chivalrous combat, in which two independent fighters match strengths, in which each man remains independent, loses for himself, wins for himself. Then there is the fight fought by vermin, which not only stings but also sucks blood to sustain itself. That is the fight of the professional soldier – you. You have no capacity for life. To live comfortably and without worry and without blaming yourself, you prove that I have taken all capacity to live from you and put it into my own pocket. Why would you worry about your lack of ability when it is my fault and responsibility? You lie down idly and allow me to drag you through life in body and mind.

Here is an example: Recently you wanted to marry. At the same time you did not want to marry (as you admit in your letter). To avoid any stress, you turned to me for help by forbidding you to marry and arguing that it would bring shame on my name. But I did no such thing. First of all, here as in other cases, I did not wish to get in the way of your happiness; secondly I would never want to hear such an accusation from my child. But was my self-discipline and the forbearance with which I gave you the option to marry of any avail to me? No, my objections would not have prevented your marriage. On the contrary, they would have been an added stimulus for you to marry the girl. Thus your attempt to flee from me (as you put it) would have been complete. Yet my permission to marry did not keep you from bringing accusations against me. You prove that it was in any case my fault that you did not get married…although it only proved that all my reproaches were justified. Indeed I did not mention one reproach that was especially fitting: accusing you of being untruthful, subservient, and parasitic. Indeed your letter is parasitic, if I am not mistaken.

I reply first of all: This interjection, which could also be turned against you, is mine rather than yours.  Your distrust of others is not as great as the distrust in myself, which you nourished in me. To a certain extent the interjection is justified, and indeed adds new material to characterize our relationship – I won’t deny it.  The proofs I offered in my letter cannot fit as neatly in real life – living one’s life requires more patience. But the correction which follows from this interjection, a correction which I cannot and will not execute in its details, does succeed in approximating the truth in my opinion, and may calm things between us and make our life and death easier.
Franz


And that’s the end of Kafka’s letter. Use the search function to check my older blogs for other passages from Kafka’s Letter to His Father:
(Image from www.kafkaestblog.files)
Posted by Erika Rummel at 05:08 No comments:

From #Kafka’s Letter to his Father: Fear of marriage. 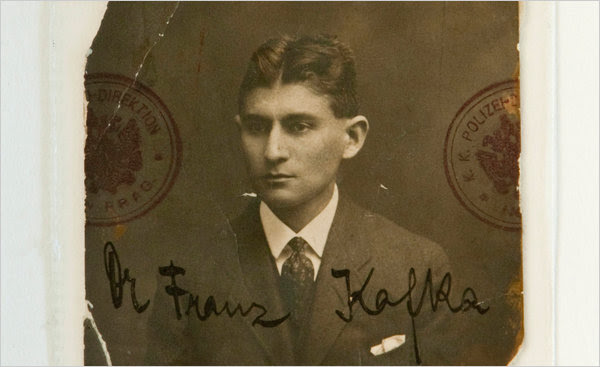 There is a belief that fear of marriage has its origin in fear that one day your offspring will pay you back for the sins you committed against your own parents. That has no great relevance to my case, I believe, because my bad conscience originated in you and is unique in every respect. Indeed the sense that it is unique is part of my torment. I can’t imagine that it could be duplicated. I must say, however, that I myself could not bear such a silent, dull, dry, decadent son [as I am]. If I had no other option, I would flee, that is, emigrate, as you wanted to do on account of my marriage plans.

But the most important obstacle to a marriage is the indelible conviction that maintaining and even more so, heading a family requires all the qualities I recognized in you, that combination of good and evil which is organically united in you:  inner strength and outward derisiveness, health as well as a certain grandiosity, the gift of oratory as well as reserve, confidence in oneself and dissatisfaction with everyone else, a sense of universal superiority and a tyrannical spirit, knowledge of people and distrust against most of them; in addition the assets that have no disadvantages such as industry, stamina, ready wit, courage. Of all these qualities I had comparatively few or hardly any. I this state I did not want to take the risk of marriage, when I saw that even you had to fight hard in your marriage and even you failed with respect to your children.

But naturally I did not explicitly phrase the problem like that in my mind and did not expressly respond to it, or the usual thought process would have taken over and proffered me examples of other men, different from you (my uncle Richard to mention one man close at hand and very different). I would have thought of the men who married nevertheless and at least did not collapse under the burden, which is already a great achievement and would have amply satisfied me. But I did not approach marriage in this questioning manner. I experienced your marriage from childhood on…and your example persuasively proved that I was incapable of marriage.

How then can I go ahead and marry without going mad! – And that is the conclusion of my life with you up to now, and that is the outlook for the future it carries within it.

(Source: Letter to my Father, text on www.kafka.org; my translation)
Posted by Erika Rummel at 04:24 No comments:

Email ThisBlogThis!Share to TwitterShare to FacebookShare to Pinterest
Labels: example of parents' marriage, fear of marriage, Kafka's lack of confidence, Kafka's letter to his father, qualities needed to marry

#AMREADING M.O. Walsh, My Sunshine Away: Keep your fantasies locked up.

The man who hurt your mother and left your family gives you relationship advice:
Was this a man who didn’t understand irony? Was this a man so devoid of perspective, so unaware of the craters he’s left in his wake, so oblivious to the fact that I knew what he’d done, that he thought his comments were acceptable?

A clarification:
What are you saying, dad? A real man only hurts women by accident?
Bingo, he said.
I felt some nameless air clear between us. But this was as far as we got.

Understanding adults.
For every adult you look up to in life, there is trailing behind them an invisible chain gang of ghosts, all of which, as a child, you are generously spared from meeting.

Posted by Erika Rummel at 02:59 No comments: