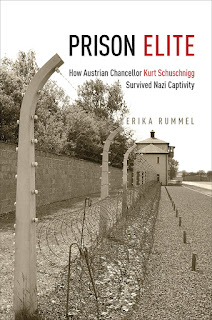 MY NEW BOOK, PRISON ELITE, WILL BE OUT AT THE END OF MAY.

After the Anschluss in 1938, the Nazis forced Austrian Chancellor Kurt Schuschnigg to resign and kept him imprisoned for seven years, until his rescue by the Allies in 1945. How did Schuschnigg cope with being held without trial or hope of release, first in solitary confinement, then at the Sachsenhausen concentration camp? Schuschnigg’s privileged position within the concentration camp system allowed him to keep a diary and to write letters which were smuggled out to family members. Drawing on these records, Prison Elite paints a picture of a little-known aspect of concentration camp history: the life for a VIP prisoner. The book describes the strategies Schuschnigg used to survive his captivity emotionally and intellectually. Religion, memory of better days, friendship, books and music, and maintaining a sense of humour allowed him to cope. A comparison with the memoirs of fellow captives reveals these tactics to be universal.

Of course, Schuschnigg’s autobiographical writings cannot always be taken at face value. A devout Catholic, he presents his memoirs as a “confession,” expecting absolution for any political missteps and, more specifically, for his dictatorial regime in the 1930s. Today, however, his account reads like an apologia rather than a confession and his role as chancellor of Austria remains disputed.

Posted by Erika Rummel at 07:43 No comments:

THE LONELINESS OF THE #TIMETRAVELLER 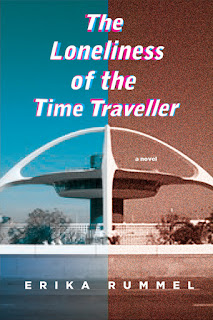 Posted by Erika Rummel at 02:25 No comments: