#CAIRO 1870: ENJOYING A #CHIBOUK IN THE ROYAL HAREM 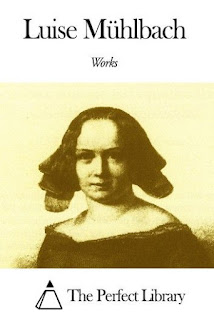 Luise Muehlbach’s account of her visit to the Sultan’s harem, continued: She is welcome by Princess Said, the mother of the heir apparent.

Princess Said addressed friendly words to us through the translator and welcomed us to Cairo. Then the conversation began, seemingly proceeding in phrases and forms much like ours. The translator explained back and forth, and every time the princesses received my reply, they nodded at me and waved their slim, white fingers, which sparkled with large diamonds.

I took particular note of one ring on the hand of the heir’s mother – a ring consisting of a single diamond without setting, a diamond which had been hollowed out at the centre, it seemed, to form a ring. The princess wore it on the uppermost joint of her little finger, where it sparkled and gave off the most wonderful light.

As soon as we were seated, the slaves came hurrying with chibouks which they offered to each of us. I have long ago learned to smoke using a chibouk in the Orient, and with great pleasure I drew clouds of smoke through a long pipe made of Linden wood, the top of which was ornamented with a fat knob of amber. But I had never seen a chibouk like this. The pipe was two ells long and covered with a net of gold threads and golden bands sparkling with rubies and diamonds. The top, which consisted of a single piece of amber, was encircled by a broad band of diamonds. The small headpiece made of gold and diamonds sat in a plate on the carpet, its opening was also encrusted with diamonds. Each of the princess received such a chibouk. We bent over the amber piece with a serious and philosophical mien, sucked in the fragrant smoke and allowed it to rise in blue clouds.

When people smoke they don’t need much conversation; the little clouds of smoke take the place of words, yet the princesses directed to us through the translator friendly and affectionate questions concerning our home country and our family, and listened with attention to our answers. They often gave us friendly nods and were kind enough to tell me that they liked me very well and to tell my daughter that they found her blond hair marvellously beautiful.

And then – but no, that’s all for today’s letter. Tomorrow I tell you more about the harem, the dancers and singers. Bukra!

Posted by Erika Rummel at 06:37 No comments: 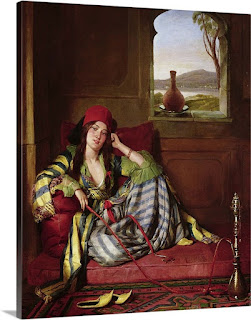 In 1870 Luise Mühlbach (1814-1873), best known as the author of historical novels, received an invitation from the Khedive (Sultan) Ismail Pascha of Egypt to visit Cairo. She published an account of her journey in the form of letters, Reisebriefe aus Aegypten. Here is her description of the Khedive’s harem:

…We got out of the carriage. Four large, ugly eunuchs stood by the door. They grasped [Mühlbach and her daughter] our upper arms and escorted us through the courtyard to the wing of the castle which housed the apartments of the princesses.

We stopped at a large glass door which led directly into the castle. The door was opened from the inside; the eunuchs remained outside, and we entered a salon of great length and width. The floor was covered with carpets and there were divans all around the walls. A group of some twenty girls advanced from the back, all dressed in airy gowns, some with their heads covered with turbans, others with small gold-embroidered caps, and others again wearing silver ribbons which hung down in back looping around their hair. Four of these girls walked toward us smiling, took us, like the eunuchs, by the upper arms and led us through the salon to a wide carpeted staircase. We mounted the stairs led by them, and at the top encountered yet another giant salon furnished with carpets and divans.

There the slave girls conducted us to three ladies resting on silk-covered divans. Then a young lady approached us. To my great surprise she addressed me in German and explained that she was our translator and had been asked to mediate the conversation between myself and the princesses. She was the governess of the young princesses, a woman of Swiss descent and able to speak French and German.

The slave girls released our arms, and led by the translator, we approach the princesses. They rose from the divan and shook hands with us. Then one of the ladies indicated that we should take our seat beside her on the divan. She moved the cushion on which her arm was resting a little closer to me and indicated that I should make myself comfortable, which meant folding under one leg, sliding onto the divan and leaning on the cushion where her beautiful arm, adorned with bangles was resting. An easy chair was offered to my daughter, and after she had sat down, one of the slaves rolled the chair up to the princesses, so that she faced them.

As we began our conversation, I gave some attention to the beautiful women, and indeed, the princesses were worth looking at. I sat beside the mother of Prince Mohamed Wawfik. Although the heir apparent was already 18 years old, his mother was still a beautiful and youthful-looking woman. In the Orient women marry young and the ladies of the harem knew how to cultivate and preserve their charms. I don’t want to be accused of indiscretion and therefore dare not say too much of the appearance of the princesses. They are young and beautiful, their black eyes have a fiery glow, as only oriental eyes do, their purple lips are always ready to smile and reveal two rows of excellent teeth. Their figures are not svelte, but of a fullness, which is popular in the Orient. The ladies greeted me by putting their hands first on their knees, then on their hearts and then against their forehead.

Posted by Erika Rummel at 04:01 No comments: