1917 – Yesterday I collapsed [and] fainted at work.  The doctor wants me to take off at least two days.  I have one day behind me already, but I know how urgently I am needed by my brave soldiers.

Mimi has given me two bedsheets.  So, now I have at least material for bandaging.  Mimi and Alfred are going to Berlin next week and will try to have me transferred to a hospital which is better organized.

1917 – They transferred me here to Berlin.  I work every day between eight and ten hours.  In this way I am recovering from the excessive strain. They employ me most often in the children’s clinic.  They know of my previous work.  If only this cruel war were at an end already!

1918 – On October 5th I received news of my brother Paul being gravely wounded. He is in the military hospital in Bayreuth.  I requested an immediate leave of absence and soon arrived there.  He did not recognize me.  They had amputated both legs in the hope of saving his life in this way.

He died on October 19th and my work consisted mainly in transferring the body.  Paul was buried with all the honours of a brave soldier in Bocholt, in the Jewish cemetery.  12 R I R 53 Offiz. St. N.V.L.

1919 –The cruel war ended on November 11. 1918. May the people finally learn to settle their conflicts “in peace.”   Father could not bear the loss of his youngest son.  He died without suffering a lot.

1922- We have had peace for three years now, but the bellicose atmosphere persists.  People blame us, the Jews, for losing the World War.  Walter Rathenau, the man who worked energetically for the reduction of German war debts, was murdered.

1925 – I am here in Zürich, Switzerland, working as a nurse in the Jewish community. My duties are diverse, but satisfy me greatly.   Only at night do I still often think of the terrible time in Bottrop.

Posted by Erika Rummel at 03:14 No comments: 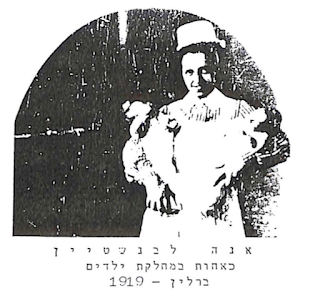 1906 – My sister Mimi (her real name is Wilhelmina) has a friend in Borbeck.  She talks about marrying him soon.  My mother Julie, née Kaufmann of Geldern, is a very modern woman and she told us exactly what she experienced during the night after the wedding celebrations.  I think I will never marry.  Mimi is different, she already looks forward to it.

1907 – We are preparing Mimi’s trousseau but we are sad because they don’t want a big celebration and would like the equivalent in cash instead to build up my brother-in-law’s shop.  Every three or four years, the number of Borbeck’s inhabitants doubles.  Mimi is very capable in the store, so our parents have agreed [to give them the money].

1907 – Mimi and Alfred have married.  All of Bocholt congratulated us, and Mimi lives now in Borbeck.  We all miss her a lot.  She always has good ideas and our shop developed/expanded? a lot because of it.

1907 – My dear mother has died.  I cannot believe it.  She was sick only for a few days and in the morning we found her dead in her bed.

1914 – Since Mimi’s wedding I work at the store.  The clients like to be advised by me, I speak almost exclusively [in the] “Platt” [dialect].  Four years ago my sister Mimi had a child. She was named Julie after my mother.  I hope the little one does not only have my mother’s name, but also her intelligence and happy nature.

1914 – August – Max and Paul, my two younger brothers enlisted voluntarily in the military service.  Bertold, my oldest brother, also talks about enlisting voluntarily.  Everybody is enthusiastic, and it is the general belief that we will soon have peace again.

I can’t believe it yet, but wish it from the bottom of my heart. I myself feel like a traitor and will register with the Red Cross as a nurse.

1915 - I have now been a nurse for over half a year.  After receiving very superficial training we were sent out to different hospitals.  I work here in Bottrop, one kilometer from the Rhein-Herne-Kanal.  The only good thing about that is being close to Alfred and Mimi in Borbeck.

Everything is disorganised, we don’t have any anaesthetic, not enough beds.  Every day they bring more injured soldiers.  They are even in the corridors, right on the stretchers on which they were brought in.  The doctors also cannot help them.  They are mainly students who don’t have any experience yet.

A paramedic asked me urgently to remove a bullet from his leg.  His inguinal gland was very swollen, his veins like blue lines.  He himself described to me what exactly I had to do.  He was to be tied down, and we were not to listen to his screaming.  I actually managed to grasp the bullet with tweezers, and there was only insignificant loss of blood.  After 14 days he was healthy enough to leave our so-called hospital.

Later I often dared to undertake such operations, also in the presence of doctors who then found that I had more skillful hands for such operations, than they.  The paramedic could not thank me enough for saving his life.

1916 – I am still working in the military hospital, I often work two days and nights in a row.  Then I lie down for an hour on the floor of our so-called surgery room and sleep deeply.

All those poor men scream for me.  Sometimes it helps when I place my hand on the often feverish forehead.  To calm them all down in the evenings, I suggested slowly saying the “Our Father” together, then each man can think about his loved ones.  After ten minutes we say the same prayer together again.  Then I asked for quiet and for each man to sleep or try to sleep.

Posted by Erika Rummel at 12:56 No comments:

Anna Andorn, nee Löwenstein, was born in Bocholt in 1885. During WWI she volunteered as a nurse. In 1930 she married the widower Meier Andorn, a prominent Jewish cantor and teacher. In 1942, the couple was deported to Teresienstadt, where Meier Andorn died. Anna was moved to Auschwitz in October 1944. She died before the camp inmates were liberated by the Allies in 1945.
Anna’s journal was made available by her nephew, Fritz Rohr, who lives in Paraguay. It constitutes an important historical source documenting the oppression, terror, and suffering of Jews under the Hitler regime.

Until 2 years ago I attended the Jewish School of Bocholt [where] I was taught by Mr. Spier, whose favourite expression was “Logical consequence”.  Now in the School of the Nuns they try to portray everything as a consequence of “God’s will”.  Studying is not as difficult for me as it is for most of my classmates.  It appears I have a somewhat better memory.
The singing lessons give me particular joy.  The nun claims that I am the only who always strikes the right note. Also, I seem to have a nice voice. Then Mother Superior asked me to participate in the church-choir.  I immediately explained to her that I am Jewish.  Her answer: “But that doesn’t matter”.
Initially I did not dare to talk about it at home, but one day my father told me that he had had a glass of beer with the pastor that day.  The pastor had smiled and waved at me the other day as I was coming down the stairs from the choir loft.
So I feared that the minister might tell him about my participation in the choir and I preferred to talk about it myself.  However, father just laughed about it: “That’s alright, in my youth we used to decorate the synagogue with flowers from the pastor’s garden.  So, you go ahead and help to beautify the service.”
1901  -  I left the school at Easter. In fact, I am sad about that.  The nuns made a great effort on our behalf and I very much appreciate them.  And I believe they liked me well in turn.
Now I help with the housekeeping, I enjoy that more than [helping in] the store.  We are 8 people, Paul, my youngest brother born on February 24th, 1896 makes the most work for us.
WATCH FOR PART II: 1906-1915
Translated from the German by Susi Lessing. The original text is at https://digipres.cjh.org/delivery/DeliveryManagerServlet?dps_pid=IE10164662

Posted by Erika Rummel at 09:58 No comments: