The first Renaissance Festival was organized in 1963 in the Hollywood Hills-- ground zero of make-believe.  There are now more than a 150 annual fairs in the US, with the two largest in Plantersville, Texas, and Shakopee, Minnesota.
Together, those fairs attract about six million visitors, slightly more females than males (53 vs. 46 percent), with a third in the under 35 years of age group coveted by merchants. They are generally well educated  (64 % college grads) and well-off (52% homeowners). They have to be well-off because it will cost them $ 300/day and up. What do they get for their money?


(Source: Paul Grendler, The European Renaissance in American Life)
Posted by Erika Rummel at 17:14 No comments:

Here is a lesson in strategy from a seasoned Renaissance politician. The quotes are from his letters, 1467- 89.

Posted by Erika Rummel at 14:46 No comments:

LORENZO DE’ MEDICI: GOOD ADVICE TO HIS SON, THE CARDINAL


What can you say to a sixteen-year old, who has just been appointed cardinal?
This is what Lorenzo de’ Medici had to say to his son Giovanni:

KING JAMES I ON MARRIAGE. Good advice to his son.

Posted by Erika Rummel at 08:54 No comments:

XTREME WRESTLING IN THE RENAISSANCE.

Luigi “Rodomonte” Gonzaga (d.1532) was celebrated by the poet Girolamo Muzio as a man who could cast the great stone and raise the mighty bar, whose wrestling none could resist.
The funeral procession passed through the streets of Fondi and reached the Cathedral porch, with banners of conquered foes trailing in the dust… Isabella knelt during the last sad rites, clasping the orphan babe Vespasiano in her arms.


No, forget that last sentence. Christopher Hare, whom I’m quoting here, asks the indulgence of all the serious students of scientific history if I pass for a time into the realms of “Historical Romance” in my earnest endeavor to recreate the atmosphere.
Posted by Erika Rummel at 02:41 No comments: 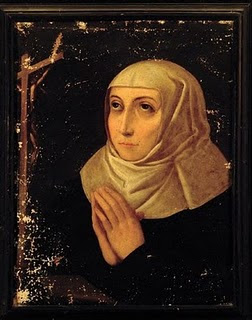 NO, NOT THAT AUSTEN. Katherine Austen ponders the world.

TWO POPES CANONIZED, BUT NO HALO FOR CARDINAL CISNEROS IN 1653.

Two popes have been canonized.  John XXIII was a saintly man, but John Paul II? If standing up to communism is a miracle, maybe Cardinal Cisneros, Inquisitor General and Regent of Spain, should have qualified as well. He stood up to the Moors after all. He personally led an army against Algeria, or whatever it was called then.
AND he worked 450 miracles. Here’s the short-list:
Not enough to be canonized? Okay, folks, here is more:
Nope, not good enough. The application for his canonization was rejected.
Maybe the applicants should have quoted the historian Jacques Marsollier:
Cisneros was a politician of integrity, an incorruptible man who loved the people.
Now that’s what I call a miracle!

Posted by Erika Rummel at 02:58 No comments: