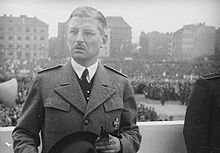 
Many thanks for taking my Kurt [Jr.] to the opera! Please keep an eye on him if you can and it’s not too much bother. I would like him to develop some interests, and not just in airplanes and tanks! I’m sometimes concerned about the boy. Of course things aren’t entirely his fault. In the final analysis he is a victim of the times. Vera troubles herself a great deal about him, but she can’t work miracles. He is basically a good soul, but easy-going and immature. I am very attached to him! Well, you know yourself how much wife and children mean to a man!
(My trans. from Sofort Vernichten, ed. A. Binder and H. Schuschnigg)
Posted by Erika Rummel at 04:26 2 comments:

#AMREADING THE LETTERS OF VERA AND KURT #SCHUSCHNIGG.

After Kurt Schuschnigg resigned as chancellor of Austria, he was arrested on 12 March 1938 and kept in solitary confinement at Gestapo headquarters.  He married his fiancée, Vera Countess Czernin, by proxy in June 1938. She took over the care of his son Kurt Junior. The 12-year old boy was forced to leave school and lived with his former nanny. Vera arranged for private tutoring at her own cost. In 1939 she secured for Kurt a place in a boarding school in Munich.

Vera to Hermann Wopfner, 9 Dec 1938
[I am supporting the boy out of my own funds.] So far it worked out reasonably well because it was an interim solution with relatively cheap assistant teachers. Now however the question of the boy’s education has been settled with the authorities, which was not easy, as you can imagine, since I had to find people who suited both me and them (and since I can’t send him to school here)…We need two teachers, which is rather expensive, even if I economize in every possible way. It can hardly be done under 200 Marks per month. Kurt and I would be immensely grateful if you could contribute something to this amount – something small, whatever you think fit. Any amount will help us.

Vera to Hermann Wopfner, 8 November 1939
I have decided to send Kurtl to a school in Munich. I have achieved that much last week…he attends the gymnasium in Schwabing in the morning and afterwards goes to the Salesianum, a boarding school. For the time being he will be there only during the day because a room is available only as of 15 November…The boy is quite happy, and this solution provided great relief to me. It was quite impossible to arrange anything here [in Vienna]. I did not even get an answer to my petition.

Vera to Hermann Wopfner, 18 April 1940
Today he is still a child. All I want is that he will recognize later on that I never even for a second distinguished [between him and my own children]. I am just as strict with my own when they do anything stupid. In my opinion one can’t be strict enough nowadays. I have certainly been brought up in an old-fashioned way, but I know that’s not the worst education. Without moral and spiritual principles I would never have been able to win through this time of great sorrow, this ordeal, and remain unshattered. And I want to arm all my children against sorrow – happy times are easy to weather!

Posted by Erika Rummel at 10:40 No comments: