TO BURN OR NOT TO BURN. Tales from the records of the Spanish Inquisition 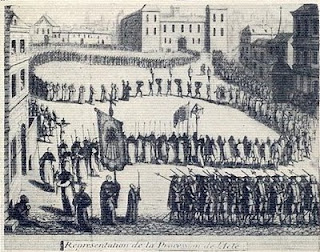 In the popular imagination the Spanish Inquisition is associated with heretics being burned at the stake. But the statistics show that executions were infrequent. Here are some figures:

What is an auto-da-fe? A public ritual, in which heretics had to demonstrate that they were penitent. They took part in a procession, wearing sackcloth (sanbenito) and carrying candles or crosses. Their sentences were read out aloud, and they fell on their knees to give thanks to God (or just thanks for having escaped the clutches of the Inquisition?)


Witches and Jews were not the only ones dragged before the tribunals. The Fugger Newsletter (a forerunner of today’s newspaper) lists the 38 people who walked in an auto-da-fe in Seville, 3 May 1579. There were Jews, Moors, nuns, Lutherans, escaped slaves, and fornicators.  One was burned at the stake. The others were reconciled with the church.
Here are examples of the sentences handed down: