THE ADMIRABLE AND NOT-SO-ADMIRABLE SIGMUND FREUD. 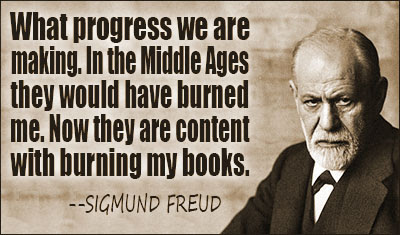 Here is a mixed list. ADP= admirably put, NSAD = not so admirable, CMUM = can’t make up my mind

NSAD. After pressuring Angelika Bijur to marry the mentally ill Horace Fink to keep him from having a nervous breakdown, he warned her “not to repeat to strangers that he advised her to marry…It gives them a false idea of the kind of advice that is compatible with analysis.” It certainly does!
ADP. No one can keep a secret. If their lips are silent, they chatter with their fingertips. Betrayal oozes out of every pore.
CMUM. A psychoanalyst should imitate the surgeon, put aside his feeling, even his human sympathy, and concentrate his mental forces on the single aim of performing as skillfully as possible.
NSAD. To his fiancée and later wife: “I will kiss you quite red and feed you till you are plump. And if you are forward you shall see who is the stronger, a little girl who doesn’t eat enough or a big strong man with cocaine in his body.
NSAD. I have borne my fiancée not grudge for her interruption of my work.
NSAD. After having to retract his molestation theory: "The expectation of eternal fame was so beautiful!"
ADP. It is quite impossible to adjust the claims of the sexual instincts to the demands of civilization.
Source: P. Kramer, Freud. Inventor of the Modern Mind. Kramer comes down on the positive side. Freud, he says,  was “brilliant, self-aware, kindly, patient, intuitive, brave, fierce, vigorous, and imperturbable” -- the very model of a modern man.