UNIVERSITY TEACHING IN THE MIDDLE AGES. 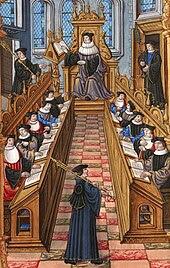 In 1215 the University of Paris published a list of rules for its lecturers:
One professor reported: I recently interrogated a student about his bad behaviour. He immediately turned on me and addressed me with “thou” (i.e. informally, as if the professor was a fellow-student). Then I said “I’ll remember that when you graduate,” hinting that he might be rejected. He answered: “Shit on you and your BA!” The professor blamed the poets, that is, the teachers of courses in the humanities, for this breakdown in student morals. You see what scandals there are, he said. I wish we all joined together and put an end to all those poets and humanists who ruin the universities.

(The quotations are from Lynne Thorndike, University Records and Life in the Middle Ages. The last paragraph comes from The Letters of Obscure Men.)
Posted by Erika Rummel at 14:31