NO DISCRIMINATION HERE -- SPANISH INQUISITION PERSECUTES BOTH JEWS AND MUSLIMS.

In the 1390s Friar Vincent Ferrer wanted to convert all the Jews of Spain through preaching and put an end to the obstinate, stinking synagogue…but he was frustrated in his efforts because the Jews were deceived and misled by that gloss called the Talmud which is full of great lies and intricate arguments.


And so this monstrous affliction lasted another century until the Spanish crown forced Jews to leave or convert to Christianity. But the newly baptized Jews observed the Faith very badly…and practiced their old religion secretly. Nor did they stop observing Jewish customs, such as eating little dishes of onion and garlic fried with oil…and the oil with the meat and the other things that they stewed smelled very bad on their breath. Also, they were usurers and had many artful tricks.


Meanwhile, Pope Sixtus IV issued a bull that gave the Spanish monarchs the authority to proceed against this heresy and to punish it with fire. The papal bull led to the establishment of the Holy Office of the Inquisition.
(From the chronicle of Andres Bernaldez)


Apparently relapsed Jews did not keep the inquisitors busy enough, so they also proceeded against relapsed Muslims:
In 1571, for example, Ramiro de Palencia, a new Christian descended from Muslims, was brought before the tribunal for having said prayers in which he seemed to call on Mohammed. One time, yawning, he said: May Mohammed close my eyes. And many times he performed the zala, raising and lowering his head without reason, and bringing his hands over his face. The witnesses against him were shady characters, it seems, so it was questionable whether he could be convicted and condemned to death. Instead he was fined  50,000 maravedis (the annual income of a wealthy grandee) to defray the expenses of the Holy Office.

HOW TO CATCH A JEW. Instructions posted on your local church door.


The instructions posted on church doors were addressed to all the faithful, men and women, of every condition, quality, and estate. They invited them to spy on their neighbours and report persons who might have sinned against the Holy Catholic faith. More particularly, the inquisitor wanted to know about Jews practicing their religion in secret and observing the law of Moses. A long list of suspect behaviour was appended.

And what if you didn’t want to denounce your neighbours?  Shame on you, abettor of heretics!

That is what Palacio called people who were reluctant to become spies for the Inquisition. He posted a warning to strike fear into their hearts.


And you, who with obstinate hearts refuse to declare and manifest the things you have heard and seen, will be proceeded against, excommunicated and accursed, for you have incurred the wrath of the Almighty God, who will turn your prayers to maledictions.


Your property will be given to others and your children will be orphans and your wives and widows. And likewise the houses you inhabit and the clothes you wear and the animals your ride and the beds on which you sleep and the tables on which you eat: let them be accursed and ruined, and may your wickedness be ever present in the divine memory. Amen.
(Source: C. Roth, The Spanish Inquisition. Image: www.beithetzchaim.es.tl).
Posted by Erika Rummel at 05:20 No comments: 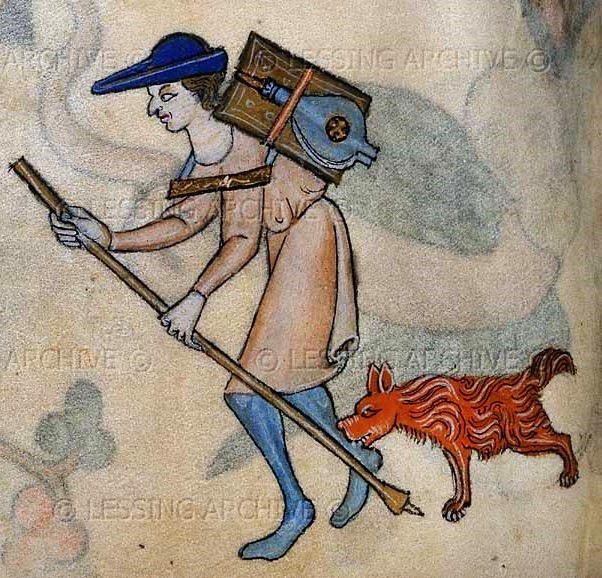 This story comes from Johannes Butzbach’s Hodoporicon (1505):
Johannes’ parents entrust him to a traveler who promises to make a scholar of the boy but instead bullies him. The two travelers arrive at an inn where the landlord greets them: If your money is good and you are good drinkers, you will be welcome guests.
The companion turns out to be a very good drinker and spends all of Johannes’ money, then forces him to beg for a living.
Shades of Oliver Twist here? He regarded me a something delivered over to him, indeed as a stray that he had picked up and made his property.
If I came back empty-handed, he beat me furiously. If I succeeded in getting something good, he devoured it at once, and I got only what remained…Indeed he was so suspicious that he often forced me to rinse my mouth with water and spit it out that he might see if I had perhaps appropriated something from my begging.
Johannes flees and makes his way back home. The relationship between his parents is rocky. My father soundly beat my mother and pulled her hair severely. When I saw that, I threw down my pack and with my brothers and sisters rushed to my mother’s aid, against my father. I succeeded in dragging her from under his feet. Weeping bitterly I left the house and vowed never to set foot there again.
Johannes works hard, saves up money, and begins his studies, but now he is dogged by bad health: burning fevers, tumorous affections, quinsy, swelling of the larynx, boils on various portions of my body, swelling of the feet and thigh, which a woman cut out with an iron instrument, and an itching malady called fig-warts which covered my body like the bark of an oak tree.
He overcomes his health problems and enrolls in the school of Deventer. In his second year there, the Abbot of Laach canvasses classes to recruit monks for his monastery. None of the students are interested since they have already paid their course fees and rented lodgings for the term. Besides, it was an unsuitable time for travelling as a great cold prevailed. But Johannes volunteers, takes the vows, and eventually becomes abbot of Laach himself.
If you ask me, he would have made a great guest on the Oprah Show.

Posted by Erika Rummel at 19:38 No comments:

ADULTERER SENTENCED TO DEATH BY DROWNING. A Renaissance tabloid headline?


An exemplary tale to warn you against Satan’s tricks from a German scandal sheet published in Strasbourg, 1534.


The preacher Claus Frey was invited to stay at the house of a pious citizen in Nürnberg. But the fruit of his preaching soon became apparent when he seduced the man’s sister, Catharina, and aroused in her the desire to be his handmaid. On a Saturday night, when she went to bed, the seed in her heart sprouted fully. She felt an urge to give Frey her body, her honour, and her possessions, and to let him do with her as he pleased.


Frey took her up on the offer, but when Catharina discovered that he was a married man, she had second thoughts. He too felt badly about it and said to her, “True, we won’t do it again.”


A few months later, however, the urge seized her once more, and they carried on until Frey’s wife hunted them down. She complained that she had been robbed of her husband, with whom she had six little children and struck his new bride. Frey in turn hit his wife on the head, citing the bible: To be an apostle of Christ, I must first hate wife, child, house, and estate. He was ready to abandon them and begin a new life in the Lord with Catharina.


The pair fled to Strasbourg, but the new apostle wasn’t welcome there. Adultery was against the law, and the authorities imprisoned him. As far as they were concerned, Frey was no apostle, but a satanic whoremonger.
They could not tolerate public adultery and whoring and passed judgment that he should be drowned. Frey was unrepentant. When they took him to the river, he said: "What a nice day to go swimming."
When Catharina heard that he had been drowned, she tore up his letters and threw them into the privy. She realized that she had brought shame on herself and that all her hopes were lost. -- God only knows how this will turn out.


Well, friends, think about poor Catharina when you are tempted by Satan, and if you want to read the whole story, my translation will be published in The Correspondence of Wolfgang Capito, volume 3.
Posted by Erika Rummel at 06:19 No comments: 
STEP ONE: Choose a wife of the correct size. Look for one who is fairly big and has limbs of ample length. Obese is out. Those laden with fat are subject to coldness and constipation and slow to conceive.


STEP TWO: Check statistical likelihood that she will bear you a son. It is an excellent sign if a girl has a great number of brothers and no sisters. Chances are, when she is yours, she will fare like her mother.
Okay, you’ve married a woman who is the right size and has brothers.


STEP THREE: Have sex with her.
That may work for Italy. Or L.A.  But what about Canada, eh? Sorry, Torontonians, no sex between November and April.
Posted by Erika Rummel at 06:44 No comments:

Email ThisBlogThis!Share to TwitterShare to FacebookShare to Pinterest
Labels: conceiving boys, Leon Battista Alberti, no sex after meals, no sex in hot or cold weather, Renaissance babies, sex without passion

This good advice comes to you from artist and philosopher Leon Battista Alberti (1404-1472).

Posted by Erika Rummel at 06:19 No comments:

Email ThisBlogThis!Share to TwitterShare to FacebookShare to Pinterest
Labels: Leon Battista Alberti, one wife only, procreation, Renaissance advice on procreation, wife like property 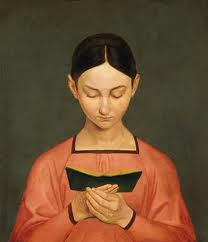 Here is what Juan Luis Vives wants you to consider, gentlemen:
(Source: J.L. Vives, The Duty of Husbands)
Posted by Erika Rummel at 18:44 2 comments:

Email ThisBlogThis!Share to TwitterShare to FacebookShare to Pinterest
Labels: best age to marry, curriculum for women, Duty of husbands, Juan Luis Vives, the virtue of silence

The Husband’s Duty is the title of a book by Juan Luis Vives, but you know what? It’s a misnomer. It’s all about the problems women cause. Well, maybe Vives means it’s the husband’s duty to find a wife that isn’t problematic.

In the Renaissance it was hard to get a divorce unless you had the clout of Henry VIII. And even he had to take extreme measures to get rid of his wives, such as beheading them and founding his own religion. This wasn’t an option for the average guy. So Vives’ advice is to get a wife who loves you.


Ultimately, men just have to put up with women. Who is so hard-hearted that he cannot take pity on their condition? We must overlook many things in them. The creature weaker in nature must be tolerated by the stronger.
Posted by Erika Rummel at 06:14 No comments:

THE RENAISSANCE MARRIAGE: HOW TO KEEP YOUR MAN HAPPY.