@amreading Rayanne Haines, Stained With The Colours of Sunday Morning. 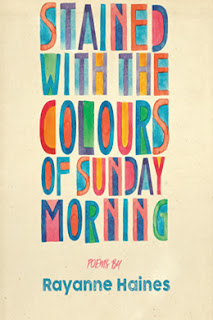 Did you know that a family epic can be written in 60 poems? Rayanne Haines has managed this astonishing feat. In a slim book of poems she tells us the story of three generations of women – Georgia, Isabella, and Alina, whose Italian heritage lives on in Canada. All of life is contained in these verses: sex (my skin carries the spices/ of men I’ve made love to), marriage (don’t ask the wild women heart in me to bend), the mother-daughter relationship (my angry daughter, unreachable by me), even the Canadian weather: We wondered if the earth/was trying to finish herself off./ Each February was the same./Our bodies desperate/for the lush wine blood of the sea.


in italy my grandmother


so they would sing to the other


for a brief taste of flight


why they let themselves


why they did not rebel