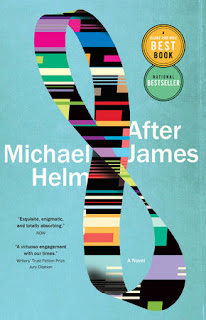 Alph, an experimental creativity pill and the concept of neuropharmaceutical enhancement of your brain is ghosting around in this novel. Ali, who tests it, has a numinous lifting. It brings a feeling of simultaneity, not tick or tock but both at once, sustained. It opens the mind to connections otherwise obscured by temporal distances, by fading and forgetting. One of the subjects had written of “absolute presence.”


Henry James (the “James” of the title) set the precedence in his novel The Turning of the Screw. His ghost story seemed to confirm the existence of a thing not yet named, like an invisible planet postulated through math. James understood these internal phenomena. The effects of Alph were not supernatural and yet brought the presence of something unseen.


Ali reads James’ novel and has a vision – Alph was crossing the blood-brain barrier. The chemical appeared as small attenuating swirlings in the blood, like tornadoes…the image lasted only a few seconds, but it was as certain as the remembered lines of text. They return with more force than when she read them. She was in two places at once, in two times at once. Was the border between the states of vision and reality eroding? And was her present reality itself already compromised? Certainly she was experiencing slight jump cuts in time. Without seeming to have returned to it, she was back at her desk.


Is the protagonist of the next chapter on the same drug? He has been hired by the enigmatic Durant to interpret poems posted on a website, but soon finds that anyone who tried to penetrate it began to see their own lives communicated back with terrifying veracity. He experiences a heightening of his senses. I was aware of my failure to see, of having grouped a series of first glances into a type based on a general similarity and so overlooking each distinct feature. It was what everyone did, this lazy way of seeing. Suddenly he recognizes the man who was following him. Was it a sharpening of his senses or just paranoia?


In the typical fashion of contemporary literature, Michael Helm disdains explaining things to the reader. You’ll have to figure them out for yourself.
Posted by Erika Rummel at 04:23