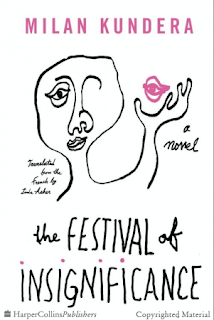 Hm. Not sure whether to recommend this one. It’s billed as a novel, but it has no plot. And yet one keeps reading on, perhaps as the review in The Guardian says, pitched halfway between hope and boredom.


Well, it has its moments, as in the story of the suicidal woman who wants to drown, kills her would-be rescuer, and survives. Her life, unexpectedly recovered, is a kind of shock that breaks her determination; she no longer has the strength to concentrate her energy on dying. And so she swims to the shore and goes on with her life.


There is also the meditation on the attractions of a woman: Her behind? Her legs? Her breasts? All very well, but here comes a young woman whose sexy navel is visible between her low-cut pants and her cut-off T-shirt. How to define the eroticism of a man (or an era) that sees female seductive power as centered in the middle of the body, in the navel?


There are tourists everywhere in Paris, earnestly studying art and architecture with the help of their guidebooks. Then there are the Parisians strolling in the Luxembourg Gardens, paying no attention whatsoever to the art works in the park. Ramon inhaled their indifference like a soothing calm. Gradually a slow, almost happy smile appeared on his face.


I think that’s hat happened to me reading this book which nonchalantly goes on about the incongruous, the superfluous, the useless, in other words celebrates the insignificance of life, as I know it.
Posted by Erika Rummel at 09:31